Here in the office we had an issues with Revit "Groups".... Some of the grouped objects were not behaving properly. :-(


When we copied the group to the upper levels some of the objects were remaining on the lower level, in some cases creating duplicate objects on the lower (original) level.


This is the solution to the problem we were having.


1. The underlying issue was that the component families (which remain at the same level after the model group is copied) are not workplane based. Because of that they are unable to disassociate with the original placed level.
2. You can work around this issue by editing a family, open 'Family Category and Parameters' dialog, check 'Work Plane-Based' and reload back into the project.


3. After that the group should be able to be copied and pasted to another level. 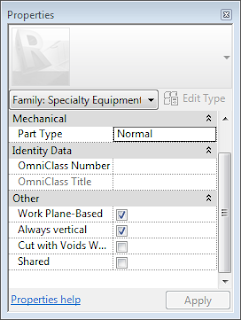 The underlying limitation in this case was not with groups. If we ungrouped the instances and select one of the problem family instances, and changed its level references, the 'Host' constraint remained the same and the furniture does not move to the selected level. The same behavior is seen when these family instances are in groups.


Once we checked the "Work Plane Based" parameter and reloaded it back into the project all was fine...
Posted by Scott Chatterton at 7:30 am