I hear a lot about mandating BIM from all over the world, from Australia to Germany.
To a certain degree many countries are mandating BIM in one form or another, typically government lead projects where fiscal responsibility and accountability is necessary are the first to adopt a mandate.

I read articles or mandates that refer too the UK's BIM Mandate refering to the structure, organization and "success" of the UK BIM Mandate implementation, it makes me nervous when countries base their mandate, or their decision to mandate BIM on the UK model.

There are a number of factors that influenced in the decision to Mandate BIM in the United Kingdom. There are many positive aspects that the UK have taken advantage of through the mandating, however each country, region, district and local authority have a variety of reasons to adopt, or not to adopt a BIM mandate, interwoven into this decision are their own specific requirements and reasons to mandate BIM. 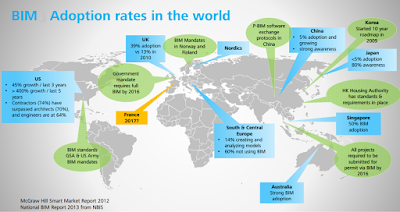 When looking into mandating BIM, whether your making the decision on behalf of a country, local authority or your own business, take existing BIM mandates with a grain of salt and evaluate your own needs. Look at implementing incrementally but with a view of the bigger picture, and if it needs to change due to changes in the industry, be flexible enough to accommodate those changes and influences.

Ask Why you are Mandating BIM and what is the impact or effect your looking for.
There are many influences to the decision to Mandate BIM including:

Either way, a BIM mandate needs to stand alone in it's development, taking lessons learned from similar mandates with an understanding and reasoning of the why and how they were developed.

Much like a project, each mandate is a prototype, drawing upon experiences and skills developed from other mandates and utilizing what's applicable according to the needs.

Posted by Scott Chatterton at 1:00 am