Something I learnt years ago was to say “yes” when asked to participate or take on a role or a responsibility. This has become my philosophy in life, to say “yes” more often. This came about after a colleague, whom I respected, asked me to join a committee he was chair of. Prior to this we had parallel careers, we worked together at an Architecture firm and he quickly rose in the ranks and eventually moved on to bigger and better things. He now plays a senior role in a large architectural firm and is influential in the Architecture industry both locally and nationally.
This has become my philosophy in life, to say “yes” more often.
Early on I realized that I had to make myself stand out if I wanted to move forward. If someone asked me to complete a task I would say yes, even if what was asked of me was outside my comfort level. What I quickly found was that by stepping outside of my comfort zone that saying yes more often not only opened doors to opportunities but it also increased my knowledge and skills. 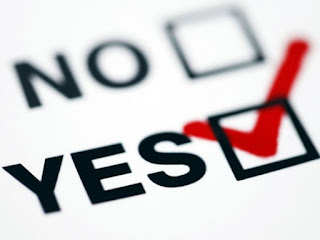 Start with asking questions, find out as much as you can by asking questions. People don't expect you to know everything and if you explain that your unfamiliar with the task people are more than happy to help, often people are so thankful to find someone who is willing to take on the job that they don’t mind helping you out and guiding you along.
Often I have found that the task or role isn’t as arduous as first thought, and with some guidance and a little ingenuity you’ll be surprised as to how quick you'll be able to catch on.
The point I’m trying to make is don’t let your self-doubt or reserve stop you from moving forward in both your personal and professional life. Don’t be afraid to take on something new, you may be intimidated or doubt your own abilities, but unless you take on the challenge you may never discover your full potential.
Take the risk, take on the challenge and say yes when approached to head up that difficult project, or join a committee or complete a task. I even got to a point  that when a trusted friend or colleague approached me I would say yes even before they asked me… I trusted their judgement and their faith that I have the capabilities to complete the task or responsibility they’re assigning me.
Some have said to me that if you say yes too often that you’ll take on too much or that people will take advantage of you. You, yourself, know the difference between opportunity and when you’re being taken advantage of. Make these opportunities work for you, learn new skills, make key connections and be know as someone who gets things done.
Posted by Scott Chatterton at 12:30 am